Hey ya'll! I''m so excited today to get to host a cover reveal by a very talented author Tamie Dearen! So without further delay, here is her first book and just below, the fabulous cover for book number 2 in the Alora series. Enjoy:)

Cover Reveal for Alora: The Portal


The compelling story of the young soulmates, Alora and Kaevin, continues…


The adventure begins with Alora: The Wander-Jewel. 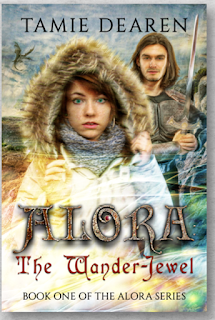 
Only while in the shower. And only of one stranger: a handsome boy with long brown hair, intense green eyes, and the oddest clothes. A boy who vanishes whenever she opens her eyes.


And then one day, he doesn’t…


Alora’s safe world is soon turned upside-down as she’s thrust into another realm where her soulmate waits, magic abounds, and unfathomable evil seeks to claim her.


The epic fantasy continues in Alora: The Portal. 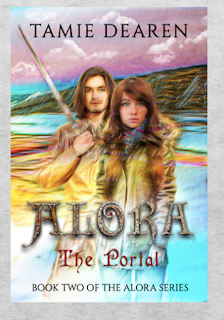 
If one of them dies, they both die.


Bound together as soulmates, something compels Alora and Kaevin to abandon the safety of their refuge for the dangers of Kaevin’s realm.


The soulmates arrive in the midst of a raging battle as Stone Clan warriors defend their capital, an attack made more deadly by the pervasive evil of her father. Alora and Kaevin face mortal danger as they fight against man and magick to preserve Kaevin’s home and heritage.


For Alora’s father will have her allegiance. Or her death.


“…I have to admit – I wish the book had not ended! …The romance is sweet rather than steamy making this a clean read for young adults, but the action and adventure is thrilling enough to keep any age reader turning pages…” Today’s Visions


“I found Alora to be a breath of fresh air in the YA fantasy genre! … A YA fantasy with characters you will adore and cheer for, Alora is a book I would recommend to any of my friends!” Books Are Sanity


Alora: The Portal is available on Amazon for the special pre-order price of 99¢ through the August 31 release date! As a bonus, Alora: The Wander-Jewel will be FREE on August 30 through August 31!

Excerpt from Alora: The Wander-Jewel


Alora fought the urge to beat on the tile wall. He’d disappeared again. Who was this
boy she kept seeing? Why did he only appear when she was in the shower? He seemed so
real, and she could have sworn he looked as confused as she felt. As if he was trying to
figure out who she was, as well. Was he a figment of her imagination? His eyes were so
unusual. They were green. Not an ordinary green, but a deep, intense jade, the color of
her aunt’s emerald ring. He was really cute, although he wore his wavy brown hair a little
long for her taste. Yet she could only see his head—never his clothes or the background.
Today he’d tied his hair back in a ponytail. Surely the fact he’d changed his hair was
significant. Wouldn’t a figment of her imagination have his hair the same every time?


She peeked around the shower curtain at the clock on the bathroom counter. It was
five a.m. on a Saturday, and she had chores to do, feeding the horses and letting the
chickens out. But it was winter, so she had plenty of time to spare before the rising sun
tolled the beginning of her responsibilities. Living on a ranch in the backcountry of
Montana meant cold winters, lots of work, and little time for leisure. It was the only life
she’d ever known, and she usually enjoyed it, despite the heavy work involved.
But right now, she wanted another stab at seeing that boy. The image was always so
fuzzy. If only he wouldn’t disappear when she opened her eyes. She couldn’t summon his
visage at will. He didn’t come every time she closed her eyes in the shower; it seemed to
happen when she was relaxing and letting the water beat down on her head and shoulders.
Maybe, if she were soaking in the tub, she might see his image again.


She pushed the curtain back, put in the stopper, and turned the faucet on full blast. As
an afterthought, she added bubble bath, filling the tub with fragrant suds. Soon the bath
was full, with aromatic bubbles foaming on top. She eased into the soothing water,
closing her eyes at the blissful caress of the heat on her tight muscles. And she waited.
Anticipating. Would he come? She tried to stay alert, but the relaxing warmth seeped into
her skin, lulling her to sleep.


Awakening with a start in the cold water, disappointment formed a knot in her
stomach—he’d never appeared. She released some water down the drain and added hot
water, swirling it around until the temperature was comfortable again. She had five more
minutes before she had to abandon her bath to start her workday. She lay back down,
sinking below the water with her eyes closed, swishing the fresh water over her skin to
remove the bubble bath film, her face floating above the surface to breathe.


He appeared. She held her breath, clamping her eyes shut tight, trying to hold the
image as long as possible. Though the apparition was still slightly blurry, she could see
all of him, head to toe. She took advantage of her increased perception, thoroughly
studying his image. She almost clapped her hands when her mental measurement
estimated his height at over six feet. At five feet ten, she was taller than most boys her
age. But she scolded herself for examining him as if he were a potential boyfriend. He
wasn’t even real. His clothes were made of supple-looking brown leather. The attire was
odd—held together with ties and toggles rather than buttons or zippers. The fit was close
enough that his well-formed muscles were evident. She noted his long hair was tied back,
as it had been earlier. She could only see the front of him as he stood frozen, stock-still,
with his mouth agape, his jewel-green eyes wide and… moving. His eyes were moving, up
and down, as if he were scanning her body as she had done. And it occurred to her if she
could see all of him, he might be able to see all of her.


She gasped, opening her eyes to dispense with the specter. But his image remained,
now sharp and clear. And he seemed to be standing in her bathroom. She cowered under
the water, attempting to hide under the few remaining bubbles. His eyes dropped down to
her navel, and as they widened, he whispered, “Wendelle?”


Lunging for her towel on the floor, she screamed at the top of her lungs. Hastily
covering herself and preparing to leap from the tub, she looked up, only to discover the
vision was gone—if indeed it had been a vision.


Read the first two chapters of Alora: The Wander-Jewel here.

Posted by Angela Carling at 8:18 AM