A Tale of Two Alligators 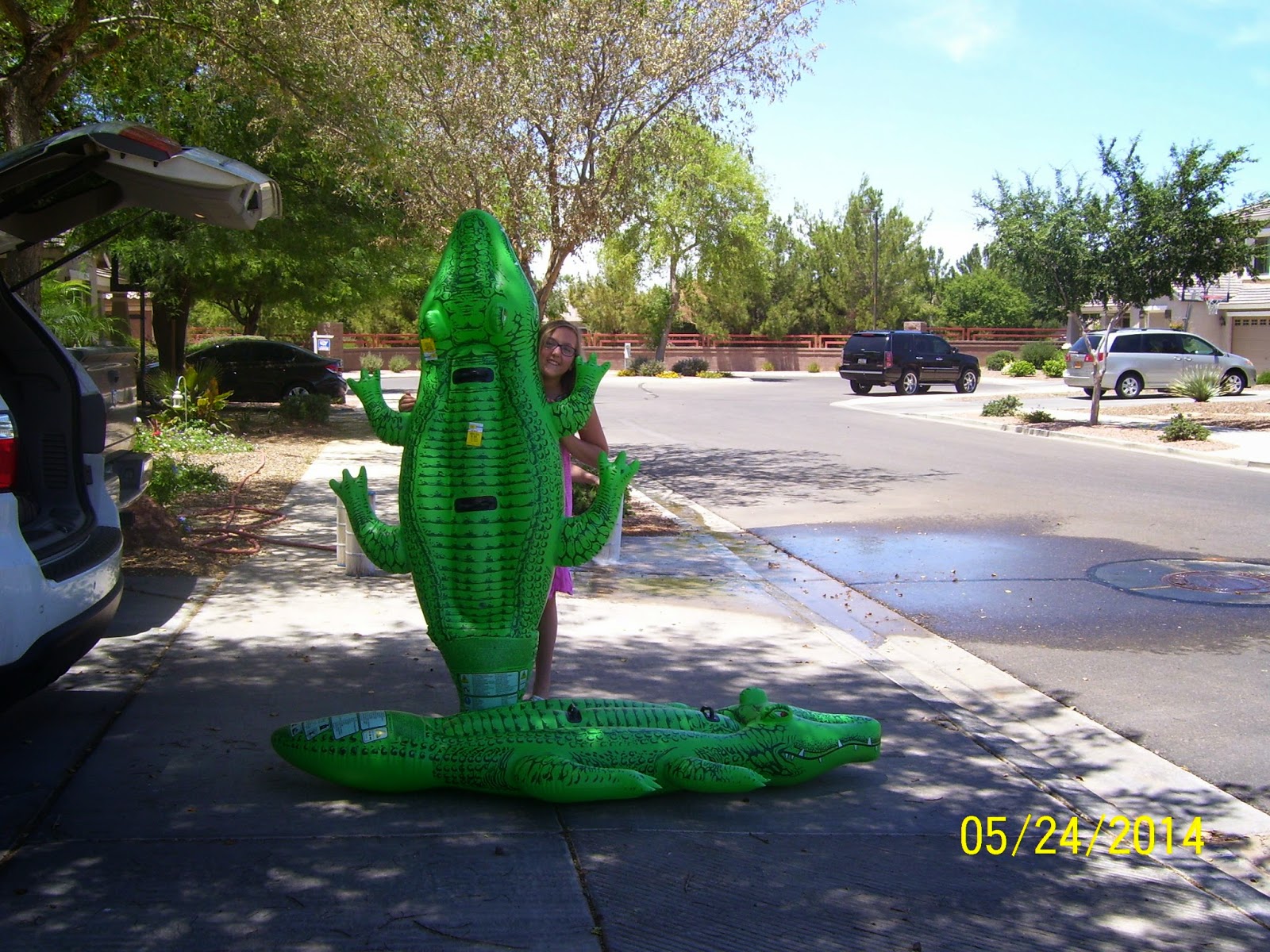 Whew, we made it through Memorial day!  To celebrate the shedding of our winter coats and mud-covered boots, I’m going to tell you how I came to meet Bob and Joe.

The fun started when my daughter went to an end of the school year swimming party. I strolled up to the house to see half a dozen children jumping on a humungous plastic alligator. I watched in fascination as each child (mostly boys) gleefully grabbed the kid on the alligator, pulled him into the water only to climb up the gator’s back and take his place as the rightful conqueror of the raft.  The delighted squeals that came from the mouths of the kids made think of my own humble pool, a small play pool at best.

Hmm, I thought, I need one of those alligators.

Not to let my neighbor know I was coveting her plastic reptile, I asked in the most casual way,

“Where’d you get the gator?”

“Albertsons, and they are already blown up.” She said.  That was it. I had to have one and fast.

After picking up my daughter, I said, “What do you think about getting an Alligator like they had at the party.”

Her gaze became distant and I could see in her face, she was imagining all the fun she and her friends would have in our pool.

I had an accomplice, and someone to blame my purchase on. It was time to move to phase two of my plan. We made our way to Albertsons. There was always the threat of others finding the display first, but we persevered. Then we saw the huge metal bin. It was all but cleaned out, nothing left but a wimpy dolphin and an awkward looking Orca.

We settled on the Orca and hauled to the car but I was still thinking about those alligators. They were two man, and had fake sharp teeth, nothing like the lump of lard we’d stuffed into the trunk of my car.

That night, my curiosity drove me to the internet. I knew then, nothing good could come of it.
I typed Albertsons into Google and waited breathlessly. There was another Albertsons only seven miles away from my house. I couldn’t tell anyone of my plans. The next morning, I claimed I had “errands to run.”

I drove in silence, wondering if I was wasting precious time. What if they weren’t there? How would I explain my long absence? The Albertson’s parking lot was packed. A bad sign. More people to steal my toys. I moved through the memorial-day crowds, and then there in the middle of the room, I saw it.

Light from overhead shone down illuminating the biggest overstuffed display of blow up pool toys that anyone has ever seen and there beneath the orcas and dolphins were TWO alligators.


I snatched them up, moving swiftly through the store with them. I heard the jealous children ask their mommies if they could have an alligator, but they couldn’t. Whahaha, they were all mine.

Like tall trophies I carried one in each arm.  By the time I’d reached the car, I’d named them Bob and Joe.

No one would question my doings now. I was the bearer of fun.  I was the queen of the pool and they would hail me with reverence.

At home, I stepped in the entry holding the gators by their tails.  “Everyone, look what I found!” I called out.

Reluctantly, they pulled their eyes from their computers to see my loot, and then put them back down again, with a mumbled thanks.

Defeated I threw my new friends in the backyard and went about my business until I heard it. Could it be, the laughter of children, in my pool? I pulled back my curtain and saw with my own two eyes. My daughter and her friends jumped and laughed, all the while wrestling with my gators. My mission was complete.

Exhausted from a hard day’s work, I took a nap and so began my summer.

I hope you find your happy place this summer. Me, I’ll be in the pool.


Posted by Angela Carling at 8:38 AM No comments:

My second book Shackled has been out for two years and I am astounded at the strong response I still receive sometimes, on a daily basis. Today, I want to share some of the words of my readers, people I’ve never met but feel bound to by a common thread, a passion to stop the sickness of abuse in relationships.

Not long after Shackled was published, I went to visit a Jr. High. A beautiful young lady bought my book.  I happened to run across her mother several weeks later and asked how she liked Shackled.  Her mother complained at me saying she couldn’t get her out of her room during a visit from her grandparents because she was too busy reading(which was not typical.)  I then asked what her reaction to the story was and she said “I never want to be in Lucy’s situation!”
I stood there saying things like, “Oh that’s good,” but inside I was jumping for joy thinking Yes I scared the crap out of a little girl. Maybe now, she’ll see the signs of abuse before they happen.

Of course I didn’t really want to scare her, but I was thrilled to scare her away from any form of abuse.

She’s not the only one to have a strong reaction to Shackled’s message.

I also received amazing emails.  I’d like to share one in particular. The author of the email has given me permission to use her words and her name in hopes that her story could help someone else. She is Charlie Anderson. She is a talented blogger. If you want to connect with her, here’s her link. http://girlof1000wonders.wordpress.com/

She writes that both she and her best friend unwittingly found themselves in an abusive situation just like Lucy in Shackled.

She writes of her friend “she admitted that she came to get me because he(her controlling boyfriend) tried to take her life. More than once. I don't know if I've ever held a person harder in my life. Much, much later she told me that my reaction scared the living shit out of her, that someone could care so much, that it kind of scared her straight.

It amazed me that a simple thing like Charlie’s love and concern gave direly needed strengthen to her friend and helped her pull out a bad cycle. Infuriatingly, women who are trapped by controlling men have been belittled to a point where they don’t feel worthy of love anymore, yet love is what will build them up again.

Further on in the email, she writes of her own personal experience, that frankly took her completely by surprise.

“January after that summer, I became a Lucy. (My Ryan) was tall, dark, handsome, with the cutest grin and warm brown eyes. I saw lots of red flags and warning signs….He drove a wedge between me and my best friend, a rend in our relationship that could not be fixed.

I can understand that. We are taught that being loved and desired is paramount. Our media is replete with that message, so is our literature. The worst part, the message is true….Being loved and loving in return is what makes life worth living…IF that love given to us is selfless and kind, not the counterfeit that controllers offer!

Charlie’s story ends well but not until after she suffers from serious health problems including profound weight loss.

In her own words, this is how it finally ended. “I am so happy to say that after a year of on-off-on-off and all of this and the bipolar emotions and attitudes, I broke my shackles. The final straw came on Wednesday afternoon - January 18, 2012 - when he threw a fit about always paying for everything, that I was not contributing my share to "make it work".

She’d had enough of the guilt, and constant pressure and criticism.  My hat is off to you Charlie and the hundreds of women like you who break free from these controlling relationships!

To all the women who have shared their scary experiences and tender feelings, I thank you. I have been strengthened by your strength and driven even more to carry the message to all women that they should be cherished and never controlled.

To end this post, I want to give away five copies of Shackled. If you know someone who you think could benefit from Lucy’s story, drop me an email (angelacarling@gmail.com) or leave a comment and I’ll send a personalized copy to you to pass on or to them directly. Thanks so much for stopping by.
xoxo
Posted by Angela Carling at 7:34 AM No comments: