Win a free copy of Shackled on Goodreads 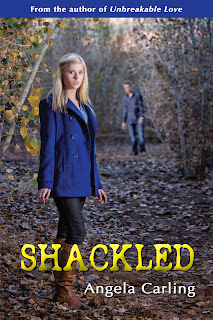 I'm so excited to share Lucy's story with you and Shackled hits the virtual bookstore in ten more days... but for now you can enter to win a copy of Shackled even before the June 1st publishing date. There are two copies to give away and the contest is free on Goodreads.  Good Luck. I hope you win! http://www.goodreads.com/book/show/13629012-shackled
Posted by Angela Carling at 3:45 PM No comments:

Why all bees hate me!

I’ve long since suspected that all bees, wasps and other flyee things hate me, but now I have proof. It started with my first bee sting.  I was living in North Carolina, doing service work for my church.  I walked up to the door of a stranger’s house, felt a pinch and looked down at my forearm to see a bee gleefully sticking his toxic butt into my skin.  I looked around.  There was no hive to defend, no precious pollen to be taken from this vile little creature.  He was being mean for no good reason. By the end of the day, my entire forearm was swollen three times it’s size and my skin was so hot, you could’ve popped jiffy pop on the surface. To the doctor, I went where I was informed that I was allergic to bees.  I kinda guessed.


Some years later, I was married with my own little yard and pretty little vines growing up the side of my house.  I decided to go outside and trim those vines.  Those dastardly buzzy creatures saw me coming and rallied the hive.  One snip and pow, I was stung by a wasp.  I’m thinking really, I give you a nice cool place to make your home.  You can drink from my pool.  Was that really necessary?  Of course, I don’t say this out loud.  People might have worried about my mental state.  However, I did end up heavily medicated to bring down the less than attractive swelling.


Now, these two examples could be written off as coincidence or nature just protecting itself, but I have one more.  Another example that defies logic, and most off all assures me that in fact all bees and flyee things HATE ME!!! About a month ago, I was sitting out by the pool watching my daughter and her friend joyously indulging in the first swim of the season.  It was nine o’clock at night. It was dark, pitch black and definitely after the time that all good bees go to bed and listen to bedtime stories told by the queen.  When they were done swimming, I stood up to walk into the house and felt the familiar stink on the back of the soft fleshy part of my arm. I twisted my arm in time to see the little wretch of a bee sinking his stinger butt into my arm.  Let’s just say he didn’t suffer long.  I squished him until he blended nicely with my tile floor.  After the stinger was out, I ran for the Benadryl but still ended up getting a shot, an epi pen and antibiotics since my arm looked like a red Hindenburg by the next morning.


How do I know all bees hate me, because the only little rebel bee to be outside of the hive at night, sought me out, like an enemy and heroically gave up his own life just to sting me for no good reason.  Just so you know, Mr. Bees still lurking, the feeling is mutual!
Posted by Angela Carling at 11:01 AM No comments:

Today I want to post a simple message. There are so many problems in this world that we have no control over and can do little to help. Last week, a blogger friend from Me My Shelf and I, reached out and asked for help to support a cause she really believes in.  It is my pleasure to pass on the information to those who might come across my blog and not hers.  Finally, a real problem that we can actually fix and in doing so, give a full life to a young man struck by tragedy..  Please click on the link below.
http://www.memyshelfandi.com/2012/05/books-for-charity-christian-hurt-files.html


Posted by Angela Carling at 11:02 PM No comments: