Could the Toothfairy Really be a Man? 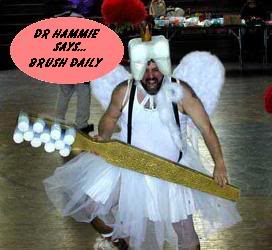 I want to tell you about the great tooth fairy debacle of 2012.  This great injustice just happened to take place at my house and I admit my follies, only because people everywhere, particularly overworked and tired parents will appreciate what I am about to describe.
It all started out so innocently.  My nine year old daughter lost a tooth. The next day the dentist redid the wiring on her braces and handed her the small white baby tooth, smiling as he informed her that teeth with a bracket attached are worth extra money from the tooth fairy. Easy for him to say, he’s not paying for the bracket. On the way home, my daughter examined the tooth, prattling on about how she wished she could show her friends the next day.  That night, my daughter placed her tooth on the dresser next to her bed and went to bed dreaming what she would do with her upcoming windfall of cash.
Here’s what happened next.
Morning #1. My daughter approaches me and says, ”The tooth fairy never came last night,”
I scramble for an excuse coming up with the less than brilliant, “Wow, she must have known you wanted to show your friends and gave you an extra day.”  I wonder if lies about fictitious magical beings count as lies since they are lies about a lie. I hope so because some bigger ones were coming.
Morning #2.  My daughter comes in, her forehead scrunched in confusion and says, “She still didn’t come.” I know exactly who “she” is and while silently berating myself say, “Are you sure it was visible enough?” My daughter is smart, but maybe she thought the tooth fairy wasn’t the brightest fairy in the forest so she went and smoothed out the clear bag that held her tooth and moved any books or lip gloss that might confuse the tooth fairy-making her tooth painfully obvious.
Day #3  She didn’t even come into my room in the morning. Instead, just before bed, while I am tucking her in, she looks at the tooth skeptically and then climbs under her covers. I leave the room willing myself to remember to go back after she is asleep.
Day 4 She wakes to an untouched tooth but by then, I’m already onto the days lists of task and have long forgotten.
Yes, at this point, I realized, I totally suck!
That night I walk into her room and find my daughter frantically searching all around her dresser. “What are you looking for,” I ask.  “My tooth,” my daughter answers. The tooth really is gone but I know my husband and I did not take it and we most certainly did not leave any money.
Now my daughter thinks the tooth fairy is a rogue tooth bandit, taking the goods but leaving nothing in return.
Scrambling again, I tell my daughter I need something from my room. As I walk through the master bedroom I call out in an unnaturally loud voice, “Honey, did you pick up some money in Ainsley’s room , maybe on the floor. She can’t find her tooth fairy money,”
Oh yeah, I wasn’t going down alone.
Now sucked into the pit of lies, overly loud, he responds,” I did, the cats knocked some money from her dresser onto the floor so I picked it up.”
I know, blaming on the cats…we’d hit a new low.
Now he’s moving fast to get to his wallet before she busts us. He breezes by me with two dollars. I stop him, “better make it three,” I say thinking about all the pain we’ve caused her.  Several minutes later I go in her room and listen as she recounts the elaborate story her dad told her about cats and money and it’s all I can do to keep a straight face.
After my daughter is settled into her bed, just before I go to leave, she turns and sleepily asks, “Is it possible that the tooth fairy is a man?”
I pause for a minute, wondering why she asks this. Does she think men are more disorganized, forgetful, or maybe a man tooth fairy got distracted by a football game?  I’ll never know, but being big on avoiding gender stereotyping in our house I answer, “anything is possible honey,” With that, she turns over and drifts off to sleep and finally, the great tooth fairy disaster has come to an end.