A Summer of YA with the amazing Lia London!

Welcome back for week two of a summer of YA. Those of us that love the Young Adult Genre would probably content reading a YA book by the pool or on the beach, if only life would let us:)

Today, I'm introducing the very talented  Lia London and  sharing what I call the NOT-BORING-FIVE-QUESTION-INTERVIEW.

I love this format because you can learn a lot about an author in just a few random questions and us YA book lovers, well, we like it fast moving and interesting! To let you get to know Lia, here's her interview.

Hi Lia,
What animal makes  your heart happy and do you have one as a pet?
Well, my favorite domestic animals are good ol' cats and dogs, and I have one of each: the cat to keep me humble by ignoring me, and the dog to boost my ego by adoring me. In the "wild", I'm awfully fond of squirrels and otters. We have a resident squirrel in our back yard--and a scrub jay. They form an inter-species friendship that delights me to watch. 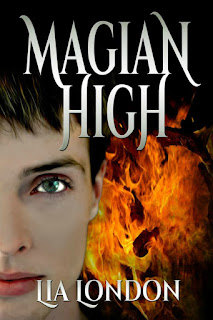 Do you have a favorite scene out of a book that you’ve written that you would want to experience yourself (we’d love an excerpt) Why is it your favorite?

Hmmm. I don't think I'd want to experience my favorite scenes because they're usually gut-wrenching or way to action-packed for an old lady like me, but in MAGIAN HIGH, I do enjoy the first time the main characters take a class. Kincaid is an average mage and Amity is a genius without magic skills. She has a massive chip on her shoulder, but they have a good chemistry--which is handy because they are lab partners.

Here's that excerpt:
Luck had it that Amity Griffin and I were made lab partners in chemistry.  I’m the only Mage paired with a Nomer.  I don’t think Mr. Petercriss approves of desegregation, and this was probably his jab at me for having supported it.  He stuck us in the back of the room with the faucet that drips, as if daring me to do some magic on the water or something.  He knows I can’t.  It’s common knowledge that I can’t even make a simple Water Ball.


While he gave the opening lecture, Amity reached over and unscrewed the spout and pulled out the little rubber ring.  “Cracked,” she muttered.  Then she took the gum out of her mouth, twisted it onto the ring and put the whole thing back together.  She finished as Mr. Petercriss came to our lab station to hand us our test tubes.  He looked at her suspiciously, but she smiled up at him kind of fake and said, “I fixed the drip.”  He grunted and went back down the aisle.  “Without magic,” she added under her breath.  She turned on her stool and faced me all perky—but like she was making fun of me.  “So, are we going to learn how to make love potions or something?” she asked, measuring some kind of oxide powder into the tube.  “’Cause I’m thinking you need one handy with your pathetic flirting skills.”
“I wasn’t flirting.  And…this is chemistry.”
“That’s not Mage code for Witch Potions class?”
For the first time since we met, I looked at her like she was dumb.  “You do know that witches aren’t real, right?”  I pointed to my nose and head.  “Look.  No warts or pointy hat.”
She floundered for a second before answering.  “Of course, but then what makes you Mages think you’re so special—just because you can fly around like superheroes?”
“Not all of us,” I said.  “And I’m not a superhero, either.  Look.  No cape.”
“Okay, so you just look like Marvelman,” she said, almost smiling.  “But can’t you guys all make stuff disappear in a puff?”
“That’s a cheap theater trick with smoke bombs and trap doors, Amity,” I said, starting to get mad.  “Matter is matter.  You can move it around, but you can’t make it disappear.  That’s a basic law of physics.”
Her eyebrow shot up.  “Can you name a single law of physics?”
“I…”
Mr. Petercriss stopped by our station right at that moment to rescue me by chewing us out for talking more than working.  Amity started moving quickly, trying to light the Bunsen burner.  It didn’t work, and her face started showing all kinds of angry.
“Is everything at this stupid school broken?” she griped.  “We’ve got to heat this now, or we won’t have time to test the reaction.”
Putting the test tube back in the rack, I touched the rounded end with my finger, let out a few sparks, and then pulled back to let a short flame lick the bottom.  The stuff inside started to melt, and I ventured a sideways glance at Amity.  Her mouth actually hung open.
As soon as she saw me looking, she smirked.  “Okay, Kincaid.  How did you do that?”
I shrugged.  “I don’t know.  Just did it.”
“But you have to know how.  Did you think something, or say a spell, or—?”  I shot her a warning look.  “Sorry, but really, how?”
The whole time she talked, she sketched the chemical reactions on our worksheet and did calculations in the margins.  “How do you do all that?” I asked, trying to change the subject.  “I can’t even spell half these chemicals, let alone diagram reactions that fast.”
That was probably the least impressive thing I could have said, but apparently, really funny.  She laughed so hard she snorted.  I mean actually snorted, and half the class looked back at us.  Great, I thought.  Kincaid, the Kinky Lover of Pig Nomers.  I can see it coming.


What is the name of your latest book out and which character would be your best friend if they could come and hang out with you.


My latest book is actually nonfiction, but in MAGIAN HIGH, I would totally want to hang with the main character, Kincaid. (This is assuming I were 40 years younger). He's down-to-earth and accepting of everyone and has no idea how cool he is. Plus, y'know, really handsome and can fly and shoot fire from his hands.

What is the most hilarious thing you’ve ever seen or experienced, the thing that still makes you chuckle when you think about  today, and do you think you could ever use it in your writing?


Ah, there have been many bumbling missteps in my life, and a goodly number of them showed up in my romantic comedy, Her Imaginary Husband. One involved accidentally wearing mismatched shoes to school, and the other had a teacher climbing up on to the desks and chasing a wasp with a yard stick during class--and then getting caught by the principal! 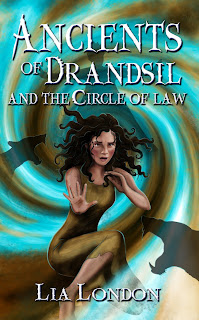 Finally, what fun stuff are you working on now and when can we expect to get our hands on it?

As I mentioned, my current WiP, due out at the end of July, is a nonfiction inspirational memoir called Knocking & Knowing. Maybe not what this audience is looking for. Most recently in the world of YA fiction, though, I released Ancients of Drandsil and the Circle of Law, and action adventure set in a pre-industrial world where the "Ancients" have the power to control things like water, wind, animals, and even death. A reviewer said they were like Superheroes from Narnia. That works! Referring back to that earlier question, there are tons of moments I'd love to experience from this book, but I wouldn't want to live there. No indoor plumbing, internet or Diet Coke...

Thanks for stopping by to learn more about Ms. London. You can learn more about her books here Lia's books. She's got some great summer sales going on this week!
Posted by Angela Carling at 10:12 PM