Today is the big day!


Whahoo! Today is the big day. In The Dying Light, the Second book in the Secret Keeper series, is officially available to purchase! 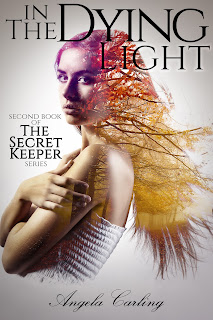 What do fans of the series say?
“When I started the book, I didn't have any expectation since this is a first time author for me.
The story starts to get intense after Winter meets the Secret Keeper and it kept me on my toes till the end, making me wonder what would happen next during each scene. I went through the whole gamut of human emotions from guilt to happiness to horror to sorrow through the heroine. Not even Liam with his mature understanding and support at the end garnered that much liking from me as much as Winter did. She is a finely crafted character who easily had me grasped in her feelings and thoughts. If I had a chance to grab the sequel's copy right now, I would.”
-Florie, Travelogue of a Book

“The characters in this book are so well developed that you feel dragged into the story, as you were living it. When someone screams you'll want to scream, when someone laughs you'll want to laugh and everything from true happiness to shear horror, that's the feelings span of this book and you'll love it.
-Anna, Book Addict

“OMG!!! This is a fantastic story. One that is magical and leaves you hanging by the edge of the page….
-Darlene, Mousey Books

If you haven’t read book one, The Secret Keeper, check it out here… http://www.amazon.com/Secret-Keeper-Angela-Carling-ebook/dp/B00X0FZWHS/ref=asap_bc?ie=UTF8

In book one, Winter Merrill discovers the secret keeper and pays a steep price to have her mistake erased. Winter then finds herself becoming the thing she hates most.  In The Dying Light, follows Winter and her childhood sweetheart, Liam as they leave High School and try to survive college.

Here’s the blurb you’ll read on the back of the book.
Winter Merrill knew it would be difficult when she took on an ancient curse to save her family, but couldn’t have imagined the isolated existence she would inherit. When her long-time boyfriend’s demanding college schedule competes with her needs, Winter is left completely alone to fight the dark secrets she bares. At her breaking point, a stranger enters Winter’s life, one who understands how she feels and more importantly knows how to eliminate the curse. Will his friendship be a new beginning for Winter or will it prove to be her demise?

Yep…it’s as intense as the first book!

Thanks for stopping by to celebrate the big release day! If you want to learn more about work or pick up In The Dying Light, here’s your link for Amazon Buy In The Dying Light and later this week it will be available on I-books, Kobo, Barnes and Noble and Smashword.

Also come and find me. I love to connect with my readers as more than I love chocolate and that’s saying something!

Posted by Angela Carling at 7:21 PM