Who thought Breaking Bad for Kids was a Good Idea?

Whether for your own children or maybe even to donate, the fact is you will probably be thinking about children’s gifts for Christmas this year. The question is, how will your chosen gift affect future generations?
This weekend, I was walking through Walmart when I saw a huge pallet of Call of Duty Mega Bloks waiting to be stocked. My mind went to my own two boys who loved Legos all through their childhood. They designed, they built and most of all they immersed themselves as they pretended with their Lego creations. 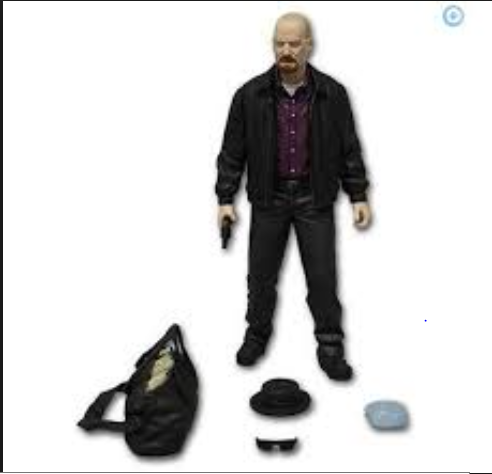 Curious, I went home and did a little research on children’s toys out this year.  I was shocked to discover a line of Breaking Bad action figures in jumpsuits with guns and bags of meth.  Yep, drugs and guns.  So what you might ask. Kids have always played cops and robbers, some acting as the cops and others as the bad guy trying to rob the bank.
I hear you. My brother loved cowboys and Indians. From one end of the hall, he’d ask me to pull out my gun which was nothing more than my oh-so-intimidating finger pointing in his direction. After my fake bang, he’d fall straight back onto the floor for at least three seconds before popping up and running off to play some other game. I’m sure my parents never worried he was going to grow up to be some lawless renegade even though he was pretending with guns, so why does it bother me so much that these are the toys we are presenting to our kids?
First of all, playtime is where kids work out most of our moral dilemmas and behavior patterns. This isn’t just my opinion. It is researched and recorded many times over. Children don’t just play for fun, that’s how they make sense of the world around them. That’s where they test limits and behaviors and learn to connect with others in a meaningful way. It’s true that kids have played army man forever, but not after watching their daddy blow people up on the video screen for hours on end first.  Call of Duty glorifies war making conflict and death a source of entertainment. Imagine how bewildering that could be to a kid. Before we connected children’s make believe to stimuli rich video games, kids created their worlds with only the limitations of their imagination and experiences. Those without real life or contrived ideas could only go so far into the world of violent play.  There was built in protection for their tender psyches but now, in the name of entertainment, we push too much on them. We steal away their ability to pace how they learn about the world around them…and for some, I believe it will mold them and not for the best.
And Breaking Bad, don’t even get me started on that.  Didn’t watch the show. I’m sure it’s all kinds of entertaining, but really does the almighty dollar mean so much that we thrust the drug culture and it’s companion, bloody violence into our children’s lives.  At what point did we think having them learn to protect their meth was a good way to learn right from wrong because they is what they are ultimately trying to do by pretending. Shouldn’t we at least give them better tools even if it means turning off our favorite show to set the example?
A final reason we should choose our children’s entertainment carefully, adults and kids aren’t separated like they used to be. We share screens and spaces more than ever before. Our world is changing and these toys show just how much. My vote for Christmas, give kids toys that let their imaginations break free but, are at the same time devoid of the worst parts of our human nature. I believe they will astound us with their ingenuity and creativity and maybe if we are lucky care for us in our latter years with the tenderness and goodness we inspired in their youth.  What do you think?
Posted by Angela Carling at 7:19 PM