Lessons From a Small Town 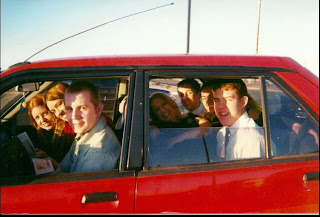 This week, during an author visit, I had the privilege of spending time with the kids of Mogollon High. That’s in the thriving Metropolis of Heber Arizona.... population thirty five hundred or so.
This little gem of a town is nestled in the forested high country of Arizona and immediately, I loved it.
When I pulled up to the school, I noticed that there were fences defining the baseball fields and dugouts but High School itself, had no fences around it….not even little chain link fences.  Kids walked from the parking lot to the buildings laughing and chatting like they didn’t have a care in the world.


Recently, they built a new Jr. High in my neighborhood.  One day, I stopped by to meet the librarian. Before they would let me in, I had to show a drivers license and then they had to buzz me through a visitor going into prison. Once through that door, I saw a tightly built campus with high metal fences and concrete walls that did resemble a penitentiary more than a school.  So when I went to Heber High I found myself staring at their wide open vulnerability, even envying it.
Then I went inside.  I spoke to their classes. I was in awe of their lack of unpretentiousness. I sat with them at lunch, along with their teachers and coaches.  They all fit inside one small cafeteria.  I learned that they had elected a boy as homecoming king that wasn’t your average homecoming king candidate.
He was funny and kind, but wore glasses thicker than the window glass on the empire state building. His hair was sticking up everywhere in an uneven cut and he was unique in personality and look.
He proudly and unabashedly pronounced to everyone who would listen, “I’m the homecoming king!”
Like the school itself, everyone was so unguarded that it was easy to get to know them.
When I left Mogollon High, I felt as if I were leaving my new friends.
Was it just this small town, or are people in most small towns less guarded, less harried by the world and the frenzied pace we keep?  I’ll never know, but I have to wonder, what if we took down our fences. What if we opened up a little and valued things that really mattered like what was inside a person instead their outward appearance.  These were the lessons I learned in a small mountain town in Arizona.